During this time, thousands of children passed through its doors.  Their minds were filled with a wealth of knowledge from the academic and vocational subjects.  Their lives were enriched by caring and nurturing teachers who took a genuine interest in their development and encouraged them strive for excellence in all aspects of life.  Their confidence was built by a plethora of extra curricular activities that taught them leadership skills and the value of teamwork.  Their world was expanded with field trips to educational and cultural events outside their rural community.

The last group of students graduated from Union High School on June 5, 1969.  At the start of the 1969-1970 school year, both Black and White students attended the school, when the Caroline County School system became integrated.

The Union High building continued to be used as a school for several years after integration. First, as Bowling Green Senior High, then as Caroline Middle School.  It was later used for gym glasses by Bowling Green Primary School and activities for the county’s park and recreation department.  It was later turned over to the county who renovated the building and renamed it Caroline County Community Service Center.  The building is now the home of the Caroline Library and other county offices.

Although Union High School no longer exists, it lives on in the fond memories of those who were privileged to pass through its doors.  Union High alumni, faculty, family, and friends worked hard to ensure the historical significance of the school is not forgotten.  A committee with representatives from the five magisterial districts was appointed to decide the best way to preserve the schools history. The committee decided to purchase a memorial stone and created a collage to commemorate the historical significance of Union High school.   The committee also successfully petitioned the board of supervisors to approve adding the words “Formerly Union High School” to the name on the front of the building.  Union High alumni remain connected through reunions and other social functions.  Money from the reunions is used to endow the George B. Ruffin Scholarship Fund. 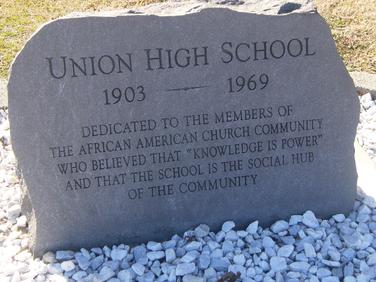