Bowling Green Industrial Academy was a private school established by the Caroline Sunday School Union members to provide Negro children of Caroline County, Virginia, a secondary education. It opened on October 5, 1903, with five students and one teacher. Liston Leander Davis was the principal and vocational education teacher. The Academy received its charter from the State Corporation Commission of Virginia on April 21, 1904. A board of trustees was established to manage its affairs. Many board members members members of the Sunday School Union.

The Board of Trustees paid all the expenses associated with operating the Academy, including the cost of instruction, facility upkeep, and room and board for the students. The school was supported with financial and material contributions from churches, Sunday schools belonging to the Sunday School Union, and individuals from the Negro community. The school also received support from friends of all races outside the community. 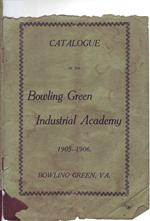 The rising cost associated with the Academy made it a constant struggle for the trustees to maintain the school. In 1913, they asked County Superintendent of Schools John Washington for financial assistance. Washington sought aid from the Slater Fund. The trustees agreed to turn over the school to the Caroline County School Board to receive money from the Slater Fund and establish a public secondary school for their children.