The United Service Organizations (USO) was formed a few months before the United States entered World War II when six civilian organizations joined forces to coordinate their civilian war efforts. Those organizations were: the Salvation Army, the Young Women’s Christian Association (YWCA), the Knights of Columbus, the National Travelers Aid Association, the National Jewish Welfare Board, and the Young Men’s Christian Association (YMCA). The USO was incorporated in January 1941. Its mission was to meet the armed forces’ educational, recreational, religious, social, and entertainment needs. The goal was to make the USO facility a “Home Away From Home” for soldiers, military members, and their families.

The AP Hill Military Reservation was established in 1941 as a training area for the US Army. The first field exercises were held on the training grounds in June 1941. In October, a USO facility was built in the Court House Square of Bowling Green, VA. In May 1943, a large detachment of African American troops arrived at Fort AP Hill for pre-combat training. Because of the segregationist policies of the times, these servicemen were not allowed to use the Court House Square USO facility. Members of the African American community volunteered their services to fill the void.

Soldiers were in the community when the Director arrived. Mrs. Elijah Upshaw and her husband were entertaining them at their home. He put long benches under the shade tree in the front yard. Parties were arranged. Mrs. Mary Banks and the faculty of Union High School were entertaining the boys in their homes and in the auditorium of the school. Negro church people were furnishing Sunday dinner for many. (Source: Historical Record of USO No. 2 Highway Club at Bowling Green VA Reported by Otto N. Carr – Director. Kautz Family YMCA Archives University of Minnesota Libraries)

On May 21, 1943, the Caroline County School Board agreed to donate one acre of land on the property of Union High School to the United States government to construct a recreational facility for African American soldiers. On June 16, 1943, the YMCA was authorized to begin operating the facility. The USO facility opened the next day in its temporary location at Union High School with Reverend Otto N. Carr as the Director.

An Operating Committee comprised of professional and business community members was organized. Members of the committee were:

In addition to Reverend Carr, other staff members were:

A dedication ceremony for the facility was held on August 8, 1944.

Volunteers planned and hosted a variety of activities for the soldiers. Various forms of entertainment included recitals, lectures, dances, and movies. There were also numerous recreational activities, such as softball, basketball, and ping pong.

In addition to entertainment and recreational activities, the facility also provided personal services. Staff members assisted soldiers and visiting families unfamiliar with the area. They also helped soldiers with family and financial matters. Sometimes they just offered a listening ear to a soldier dealing with the stress of war and being far away from home.

A very cold Sunday Night in December 1943. A solider received a message of the death of his wife. He was en route to the military Area. We were open. We served him coffee at 11PM. The solider talked over long distance to his mother. He left the building feeling some[what] better. (Source: Historical Record of USO No. 2 Highway Club at Bowling Green VA Reported by Otto N. Carr – Director. Kautz Family YMCA Archives University of Minnesota Libraries)

Click the image to enlarge it and start the slide show. 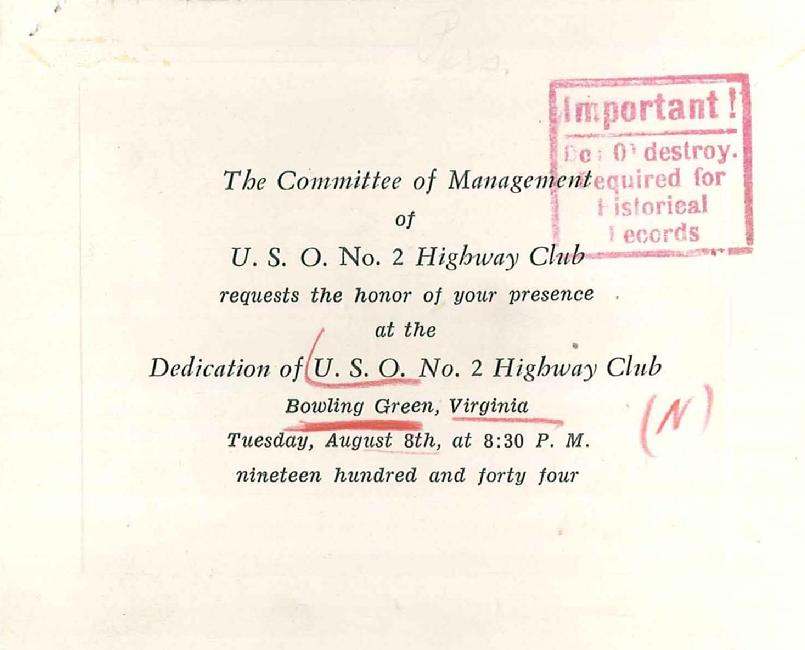 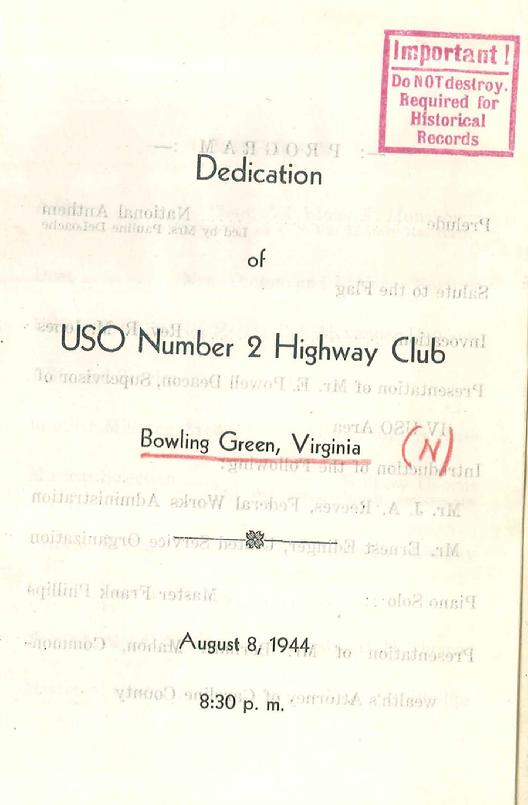 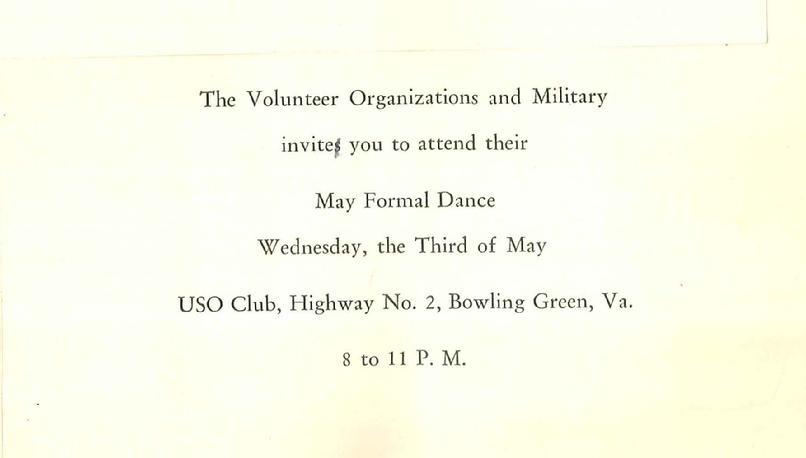 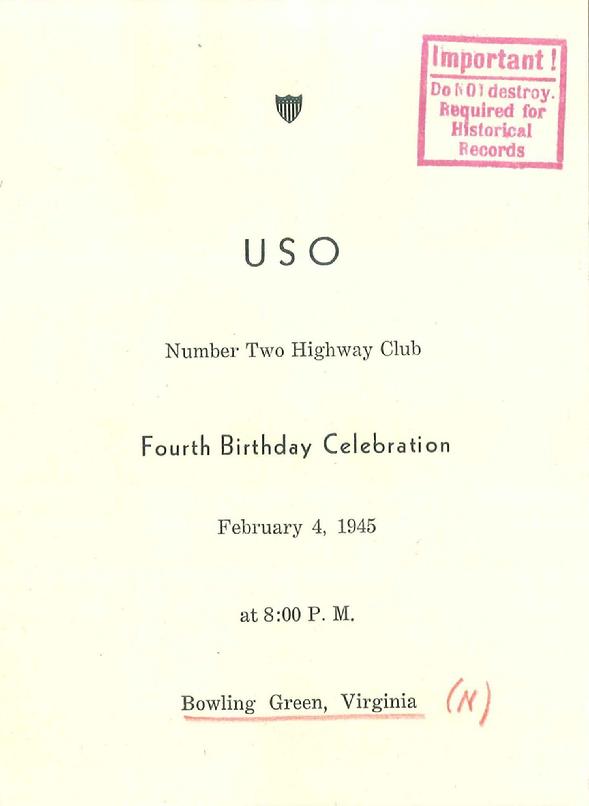 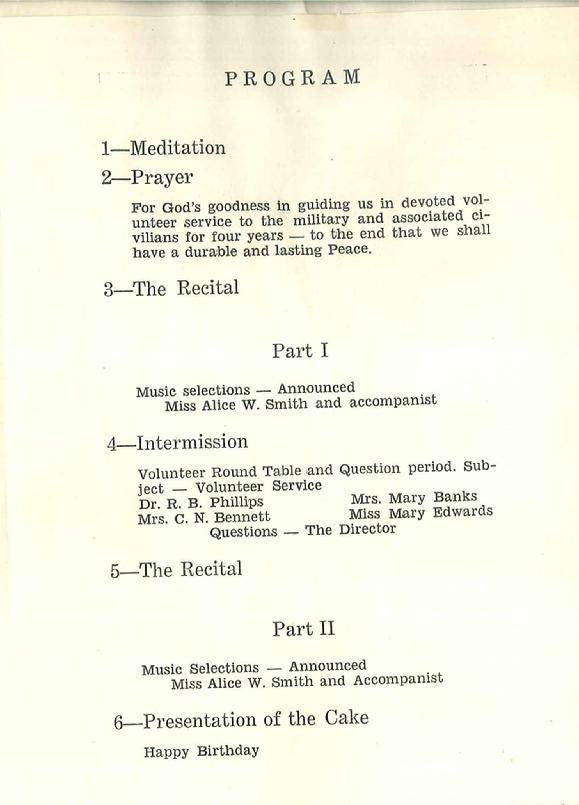 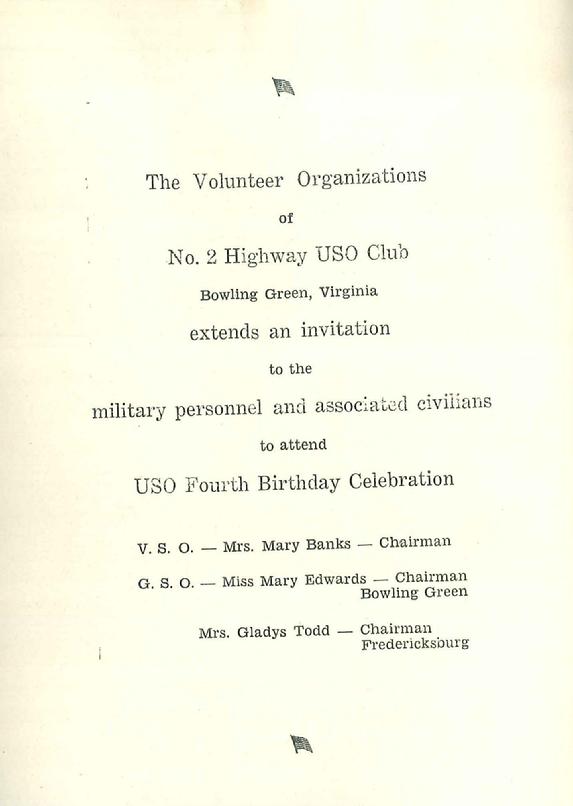 The USO staff had an excellent relationship with the community. Most of the pastors from local churches served as guest speakers at the Sunday evening church services. The Director spoke at the Union High Commencement Service and was a guest speaker at the school’s chapel service on many occasions. Members of the USO, the School Board, and other organizations worked together to secure a contract for the facility to provide water to Union High school by allowing the school to connect a pipe to the USO facilities pumping system.

The operation was transferred from a separate operation to an XO extension of the white USO facility at Courthouse Square on February 21st, 1945. The XO extension service was briefly terminated on July 31st, 1945, was reactivated on November 1st, 1945, and continued to operate until February 23rd, 1947.

Whether it was a chance for a friendly game of basketball, a dance with a pretty young lady, some much-needed spiritual renewal or a warm cup of coffee and a shoulder to cry on; the USO Highway No. 2 Club provided great comfort to the African American soldiers training at AP Hill during a very difficult time in their lives and truly became their “Home Away from Home”.

Do you have memories or memorabilia regarding the USO Highway No. 2 Club?  If so, please contact me.