During World War II, many communities in America experienced food shortages because the government rationed food. In 1942, the state government started a program to send pressure cookers to rural communities to allow the citizens to preserve food from their Victory Gardens. The State Department of Education designated eight centers to receive a pressure cooker. The Agricultural and Homes Economic teachers supervised the project, and the non-teaching staff managed the centers. 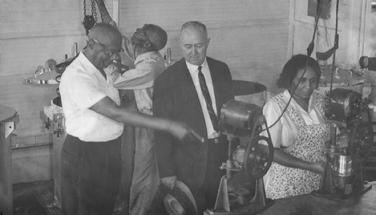 Mr. A. McKee Banks, an Agricultural teacher at Union High School, obtained money from the Sunday School Union to purchase oil burners that the agricultural teacher carried from center to center for one or two-day canning sessions. A new cannery was built later in the 1940s. All members of the community used the cannery.

In the later years, Mr. Lloyd Boxley, another Union High School agricultural teacher, took on the supervisory responsibilities of the cannery. He continued this responsibility after his retirement. The cannery was renamed the Lloyd Boxley Cannery after his death in 2005.