In 1940, the War Plans Division of the Army General Staff developed a plan to establish an army of 4 million men capable of simultaneously operating on the East and West coast. The project also called for a military reservation of approximately 60,000 acres to be used as a training facility.

In 1941, the government began to purchase property, and the citizens were required to relocate. Many buildings, including homes, churches, and schools, were demolished. Some churches moved to another location; others ceased to exist. Mica High School was the only school left standing. It became the headquarters for the military reservation. Graves were exhumed and moved to other cemeteries.

The Cultural Resource Manager is the point of contact for any questions regarding these documents or genealogy questions. The main office number is (804) 633-8255.

In the Spring of 2007, Fort A.P. Hill initiated an Oral History project to preserve the history of the communities that existed in the areas that were acquired to establish the A.P. Hill Military Reservation. As part of this project, researchers interviewed people who lived, worked or had knowledge about the people and communities prior to the government acquisition. They also collected photographs as well.

The final product of the project was a book titled Wealthy in Heart: Oral History of Life Before AP Hill.   A ebook version of the book can be downloaded from the Fort AP Hill blog.

This video is a collection of photographs and recollections that were gathered as part of the Fort AP Hill Oral History Project. Courtesy Paciulli, Simmons & Associates, Ltd. 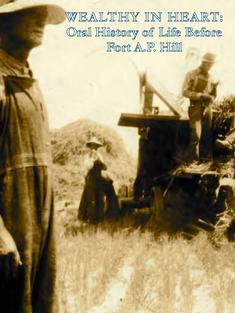 Recollections of Life on Fort A.P. Hill Lands from AMorton on Vimeo.